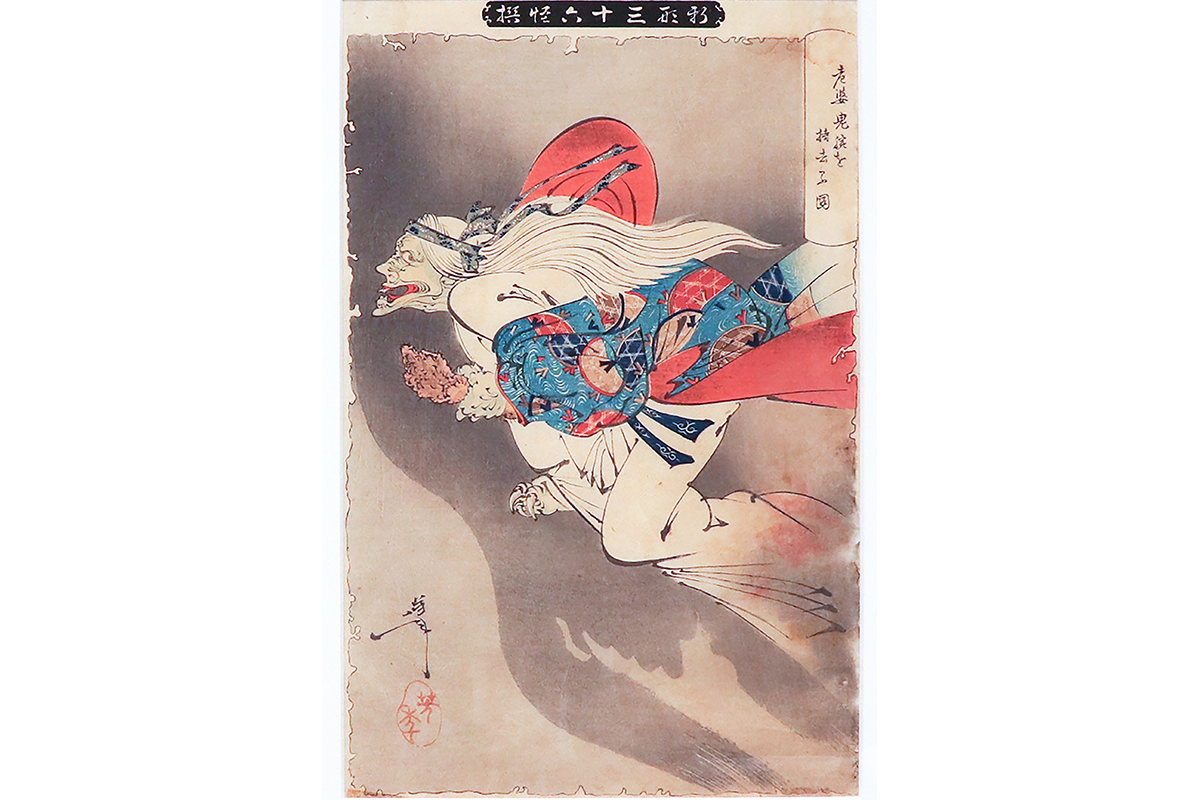 The legend of Watanabe no Tsuna and Ibaraki was first told during Heian Period Japan (794-1185). After receiving orders to eliminate a terrorizing demon, Watanabe pursues Ibaraki at the Rashomon Gate, the site of their infamous battle. During this skirmish, Watanabe manages to cut off Ibaraki’s arm, forcing the demon to retreat. Upon his return home, the triumphant samurai wraps the arm in fabric and places it in a box for safekeeping. A few days pass before his aunt shows up and starts gushing about his recent deeds. Eventually, she asks to see Ibaraki’s arm, and Watanabe agrees. As soon as the limb is revealed, the woman who had been claiming to be his aunt reveals her true nature as the demon, Ibaraki. As quickly as the demon can, Ibaraki snatches the arm and takes off with it in hand. This print, created by Tsukioka Yoshitoshi and known as “Demon in the Form of an Old Woman Fleeing with a Severed Arm” (1889), is the exact moment when Ibaraki has taken off with her arm. This is a single piece in a series titled, “New Forms of Thirty-Six Ghosts” (1889-1892).

Yoshitoshi is often considered to be the last great master of the ukiyo-e, also known as the traditional woodblock print. Throughout his career, he fought to keep this technique and art style alive. Yoshitoshi’s use of patterning and color links his artwork to the traditional yamato-e style. However, his stylized and calligraphic line work sets him apart from the yamato-e style, which is more restrained with its line making. Yoshitoshi’s artistic liberties have established him as an important source of reference as his prints have been a strong influence in the creation of anime and manga.