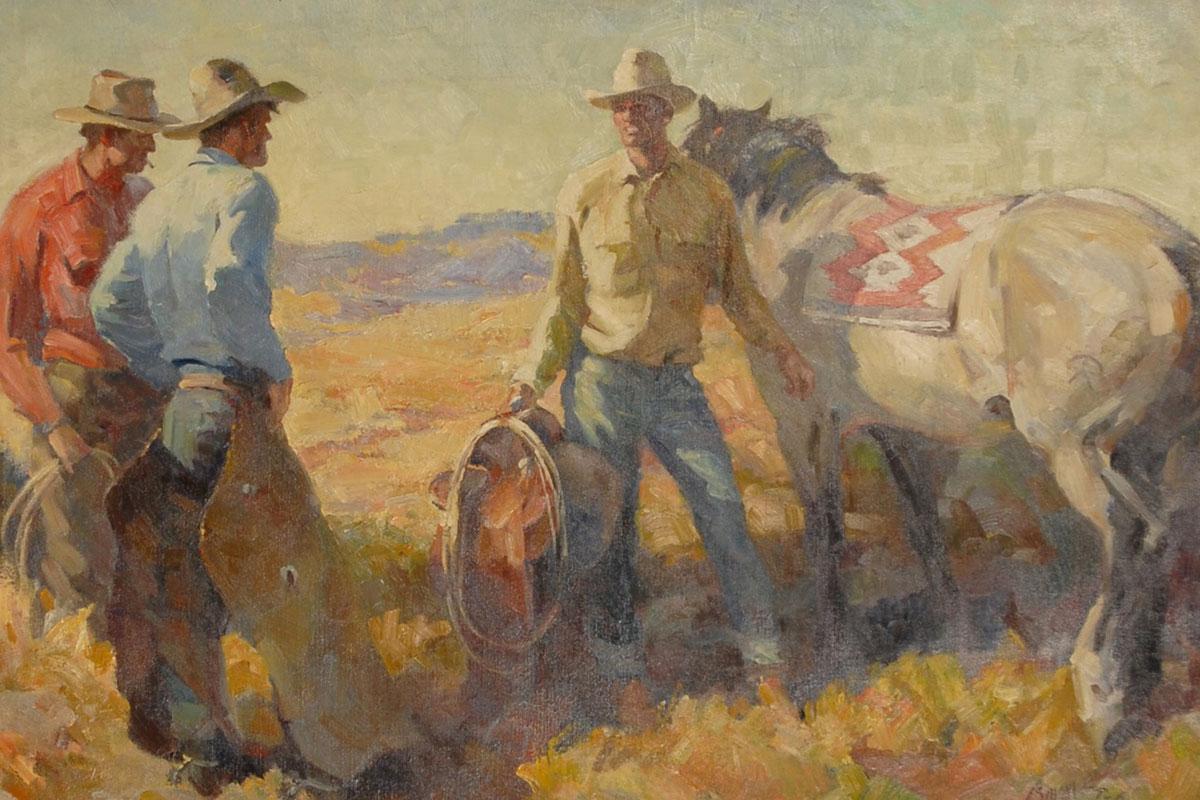 Put on your boots and cowboy hats; it’s time to take a walk through the West. This exhibition features works by Harold Bryant sourced from The Art Center’s Permanent Collection and the private collection of Chuck and Patti Shear, and includes works by Ron Henry and The Art Center’s Director of Ceramics, Terry Shepherd.

Ron Henry is an award-winning artist whose contemporary style with a focus on southwestern figurative and nature subjects has earned him placement in some of the finest galleries in California, Texas, Arizona, and Colorado.

“Nature is my inspiration. To achieve the color and brilliance that I require, I paint in oil and acrylic on gesso board. The many textures this provides enhance the feelings I’m trying to attain in my images.

Harold Edward Bryant was probably one of the best but one of the least known artists from Grand Junction in the twentieth century. Born in Pickrell, Nebraska, he grew up in Grand Junction, graduating from Appleton High School in 1914.

Bryant attended the Chicago Art Institute until 1917 when he was drafted into the army during World War I. After the war, he was a successful commercial artist in both Chicago and New York. He always favored painting the West and sought illustrating jobs that would allow him to paint his beloved horses and cattlemen.

Bryant’s work was exhibited in Springville, Utah, in 1938 and 1941, and at the Chappell House in Denver in 1940. He was included in exhibits at the Grand Central Art Gallery in New York City in 1941 and 1949; he had a one-man show there in 1946 and was one of the few living Western artists to exhibit there.

Some of Bryant’s paintings were included on calendars for the Osborne Company in the late 1940s. This was probably the biggest factor in establishing him as a great Western Cowboy artist. Upon his death in 1950, he had painted 85 canvases and completed hundreds of magazine and advertising illustrations. The Art Center is proud to have ten of those canvases in its permanent collection.

The cattleman’s West was Bryant’s inspiration. He could have been a musician or cowboy, but his whole being was focused on the sheer art of painting. Bryant’s masterful technique captured action without using violence. He liked to show real working cattlemen doing hard cowboy work. He never neglected any details, from pieces of leather to sage brush. His paintings portrayed the life of cowboys from 1920 to 1950 on the Western Colorado range.