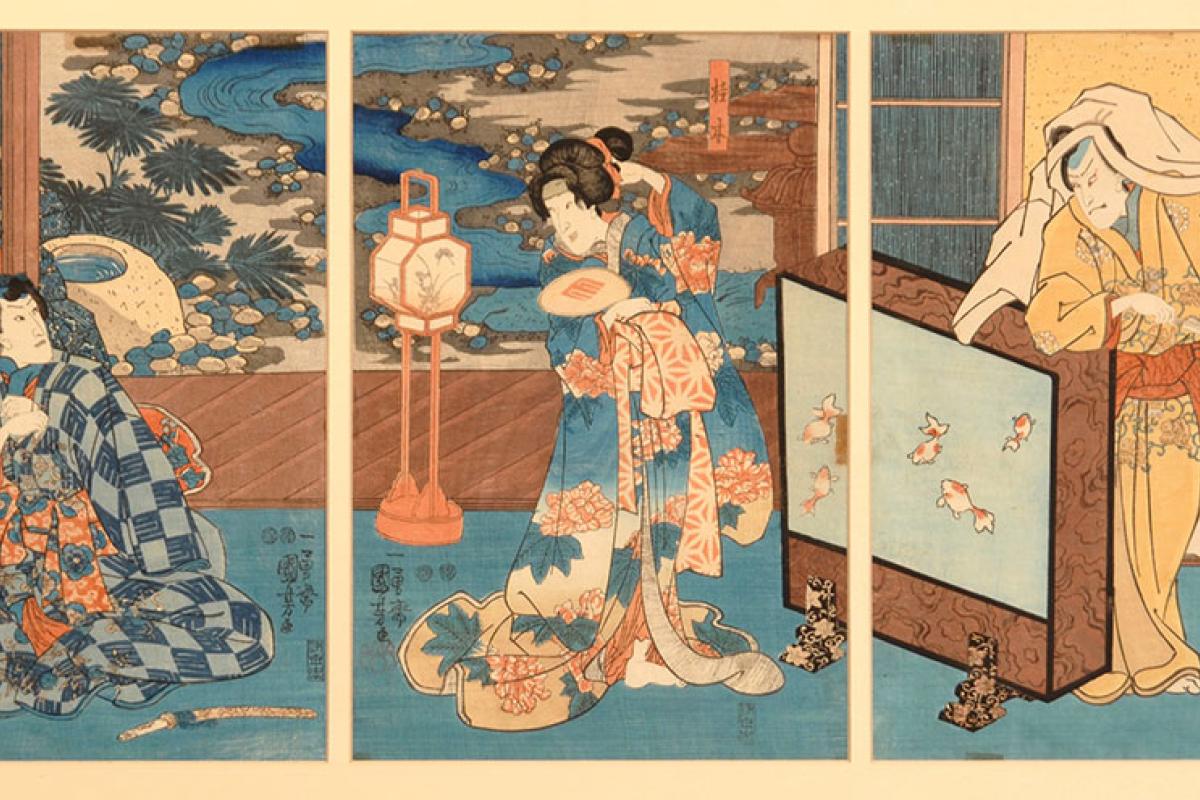 Campaign finance reform has been making headlines lately. The effort to “remove big money from politics” is shared by constituents on both sides of the aisle, making it one of our currently divided nation’s only bipartisan issues. Given the amount of large donations to political campaigns, it begs the question: What would society look like if the wealthy were completely cut off from politics?

For the answer, look no further than Japan’s Edo period (1615-1868), on display in Fans, Folds, and Folktales, an exhibition of The Art Center’s Japanese art collection. Edo Japan was ruled by a feudal military government called the Tokugawa Shogunate, which limited political power to the warrior class. At the same time, Japan’s economy grew and cities like Edo (Tokyo), Kyoto, and Osaka began to turn into metropolises. Artisans and merchants enjoyed economic prosperity but had no political sway and no opportunity for social mobility. As a result, they became ultimate patrons of the arts, spending their money on Kabuki theatre, paintings, prints, sculptures, graphic novels, and the latest fashions.

No art form illustrates this lifestyle more than ukiyo-e, a genre of Japanese woodblock printmaking that reached its height during the Edo period. The Art Center’s collection includes 27 ukiyo-e prints. They feature a high level of detail and depict lavish interiors, popular kimono patterns, scenes from the pleasure districts of burgeoning cities, and even famous male Kabuki actors in drag (women were not allowed to act).

Ukiyo-e translates to “pictures of the floating world,” signifying the ungrounded, extravagant approach to leisure that had become prevalent among Japan’s merchant class. In 17th-19th century Japan, woodblock printmaking enabled ukiyo-e artists to compose in bright colors and bold yet delicate lines. With few gradients, the colors provide some abstraction to the compositions, while the confident lines are for the most part naturalistic. The faces depicted range from expressionless to extremely expressive, depending on the time period in which they were designed.

In addition to ukiyo-e, Fans, Folds, and Folktales also features prints from the Meiji period (1868-1912) and the Sōsaku Hanga (“creative print”) movement of the early 20th century, as well as Japanese ceramics, painting, imperial court masks, and several textiles.

Though these works were made in Japan centuries ago, Colorado has a deep Japanese American history from the 20th century. The Granada War Relocation Center in Granada, Colorado, also known as Camp Amache, was one of ten internment camps established during World War II. During this dark period of United States history, between 1942 and 1945 over 110,000 American citizens of Japanese ancestry were forced to move from their homes to internment camps in remote areas. Ralph Carr, Colorado’s 29th governor (1939-1943), was the only elected official in the U.S. to publicly defend the rights of Japanese Americans.